There are four bungalows in our cul-de-sac. They are made from these materials: straw, wood, brick and glass.Mrs Scott's bungalow is somewhere to the left of the wooden one and the third one along is brick.Mrs Umbrella owns a straw bungalow and Mr Tinsley does not live at either end, but lives somewhere to the right of the glass bungalow.Mr Wilshaw lives in the fourth bungalow, whilst the first bungalow is not made from straw.Who lives where, and what is their bungalow made from?

We get lots of puzzles on group and many a times someone shoots the answer before interested person can even answer it.

So a thought came up why not start series of posts with puzzles.

So here is first one - 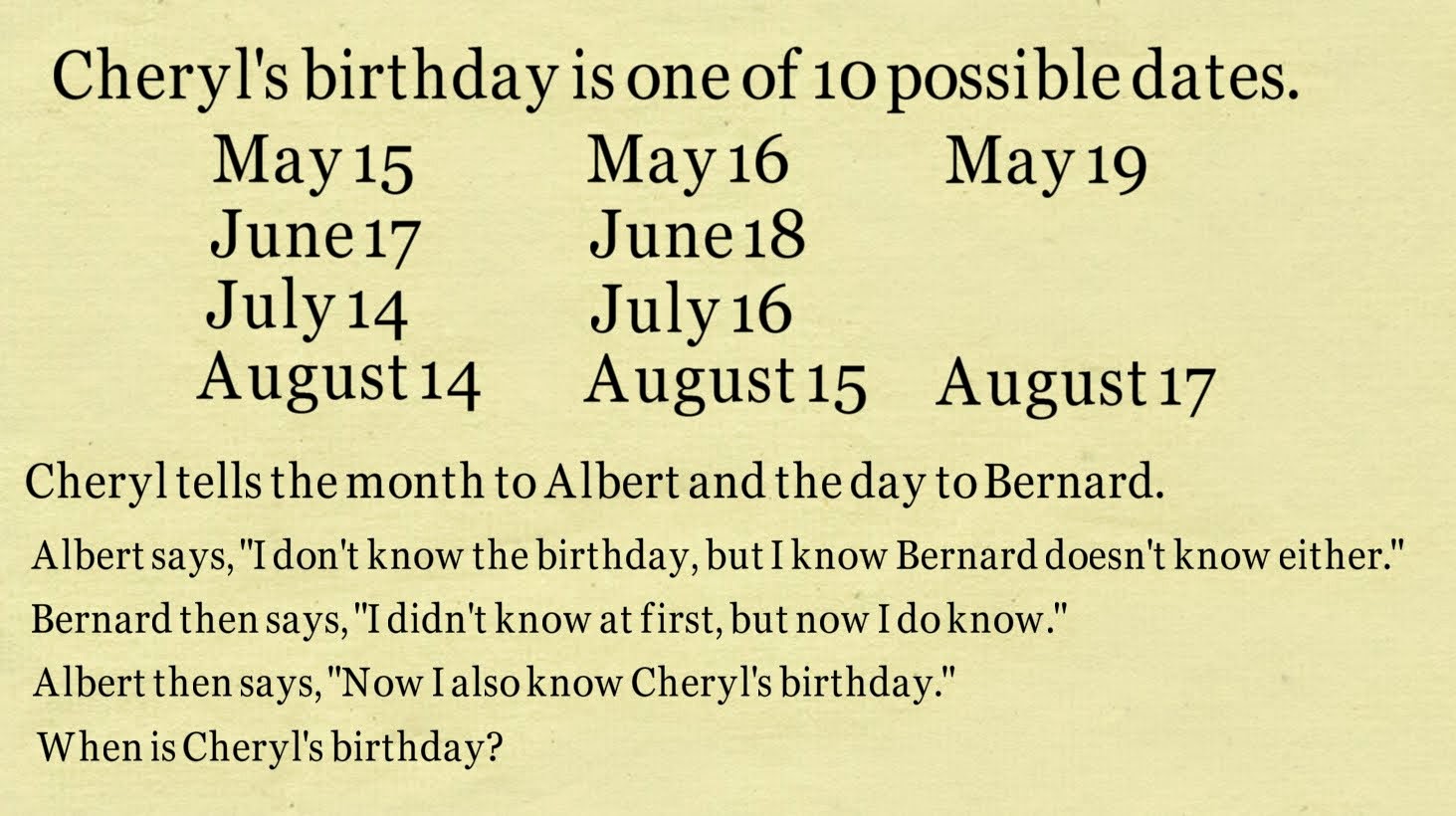 It helps to put the list of 10 dates into table form:


I don’t know when your birthday is, but I know Bernard doesn’t know, either.

The first half of the sentence is obvious — Albert only knows the month, but not the day — but the second half is the first critical clue.

Thus, for this statement by Albert to be true means that Cheryl did not say to Albert, “May” or “June.” (Again, for logic puzzles, the possibility that Albert is lying or confused is off the table.) Then Bernard replies:


I didn’t know originally, but now I do.

So from Albert’s statement, Bernard now also knows that Cheryl’s birthday is not in May or June, eliminating half of the possibilities, leaving July 14, July 16, Aug. 14, Aug. 15 and Aug. 17. But Bernard now knows. If Cheryl had told him “14,” he would not know, because there would still be two possibilities: July 14 and Aug. 14. Thus we know the day is not the 14th.

Well, now I know too!

The same logical process again: For Albert to know, the month has to be July, because if Cheryl had told him, “August,” then he would still have two possibilities: Aug. 15 and Aug. 17.

Cheryl is a Cancer, which still does not explain her behavior.

Certainly something glaringly disappointing has happened which piqued XYZ to take this sudden decision? It is quite well understood that his marriage got fixed so fast(just within one week), but that does not provide a substantial reason for a person of his stature to resign from such a and responsible post of his self-founded organization।

The stocks of the news channels all over the world have responded very well to the situation। The main rivals, CNN and BBC stocks have sky-rocketed to upto 75% higher values. Due to mixed reactions from various quarters, the stocks of PNN are fluctuating throughout the day from as low as -95% to as high as +200%.

People are very curious to know whether the candidate proposed by XYZ, Mr Aby, will be able to take on the challenges of this post. Although Aby recently started going to gym regularly, he clarifies that his shoulders are still not strong enough to shoulder the responsibility and tremendous pressure entitled the bearer of this post. May Lord Mhasoba grant Aby more strength, balance and control.

Some quarters fear the emergence of a third candidate, Mr। Shash, who is quite radical in his thought process. Although radical, Shash has served PNN with so much loyalty that he is believed to be the right hand of XYZ for PNN operations all over. But, at the same time it is opined that Shash may not be vying for this post as he has several other of his own interests(which he believes are not known to public, but public knows about them) to keep himself busy.

Our Chicago correspondent tried to call/chat with XYZ to demystify the situation, but he shrewdly thwarted those attempts। From this, his decision seems to be a sudden spurt of emotions(which is normal for him) and it is likely that he will revert it back once the emotional angle gets smoothened। The main point is, there is no official authority capable of accepting and sanctioning XYZ's resignation। XYZ has purposefully built that loop hole in the PNN administration and may be the resignation is just another publicity ploy by him.

Everybody is waiting for the resolution of a one more dreadful deadlock in the history of PNN? It is hoped that, all will find peace sooner than later.

prashant
Posted by Prashant M Desai at 8:17 AM No comments:

I had been to Veshnodevi & Kashmir between March 5 & 11.
Here is a pictorial account of same. I have been thrusted the responsibility of adding comments to photos.
The fact that some of us like it keeps me motivated sufficiently. and most importantly I somehow manage to find time to do it.
Afterall I am doing it for buddies....
I hope you find the album interesting....

I have completed the upload ...comenting is pending.
Dear Mandar,
I know one feature of blogger, whenever one posts a blog there is a facility to generate a mail . Can you add wcevalentino@yahoogroups in list?.